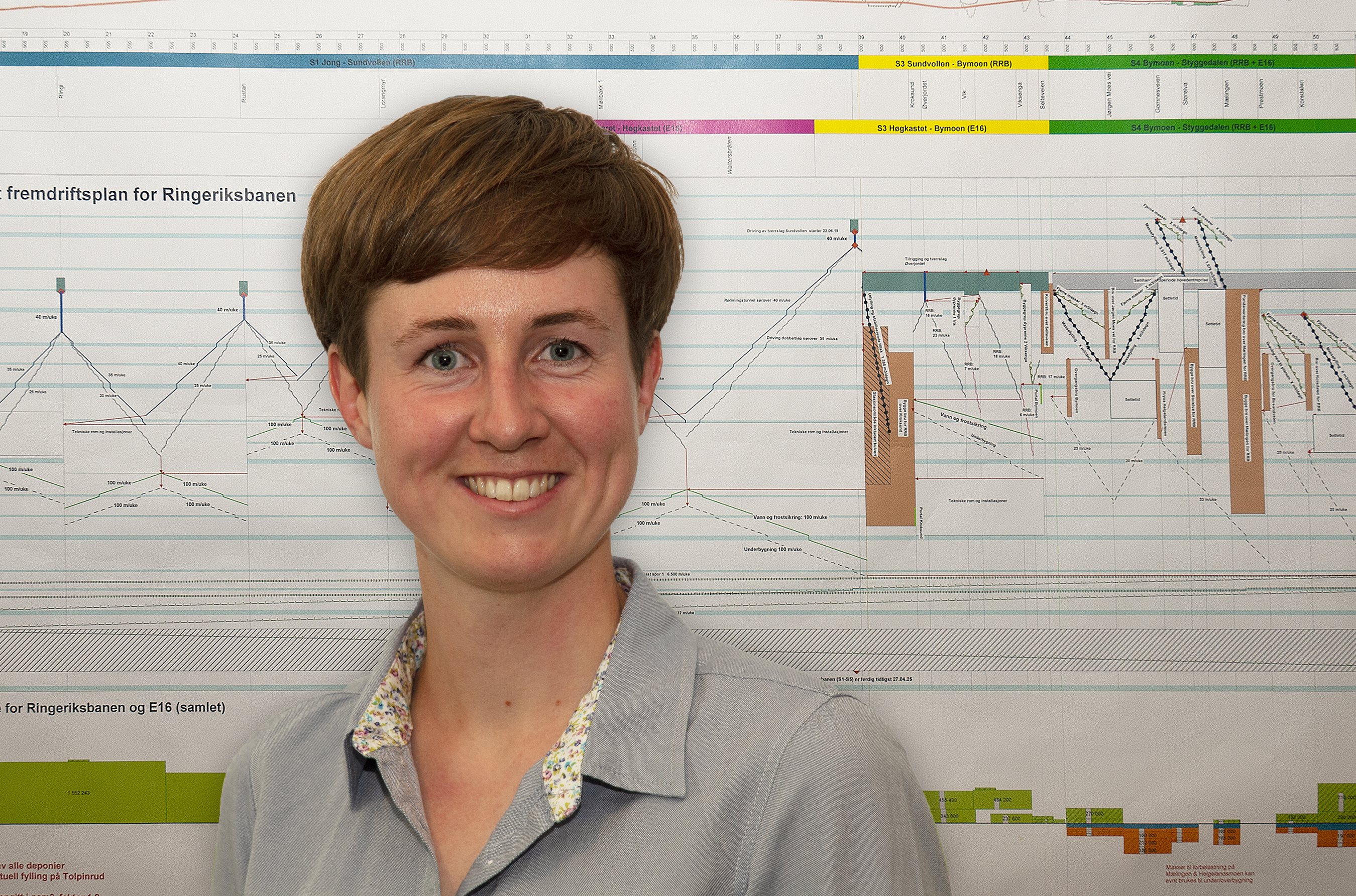 Norway's largest joint venture construction project for road and rail is being planned by a project-specific consulting company – using a special-purpose infrastructure planning technology to maximize control on progress and costs.

The Ringeriksbanen and E16 joint venture project, between Sandvika and Hønefoss outside Oslo, is huge by Norwegian standards, with several subprojects. The project comprises of 40 km of dual-lane railway, 26 km of railway tunnels, two new railway stations, 24 km of four-lane euro-standard roads, as well as several long bridges, and more. The trains will be able to run at 250 km/h and the road is dimensioned for 110 km/h. The new railway stretch will shorten the train journey Hønefoss-Oslo and Bergen-Oslo by almost an hour.

Effective planning
In order to carry out the project in terms of volume, complexity and speed, it was crucial for the clients Bane NOR and the Norwegian Public Roads Administration to establish an efficient planning environment and use tools that ensure on-time deliveries and quality. Also, in order to obtain an optimal planning process, the project is implemented with governmental zoning.

The three consulting companies Norconsult, Aas-Jakobsen and Asplan Viak were in June 2016 granted the total assignment for all the design and engineering services. Between them they founded a new, project-specific consulting company, NAA As, in order to be able to handle all the planning and engineering of the project. The purpose being to work as tight as possible and apply new methods and technologies to plan and engineer the building process more rationally. Therefore, the design is based on the use of 3D modeling and BIM collaboration models. BIM is the information carrier in all work processes, providing efficient, inter-disciplinary design and engineering.

Holistic planning process
“Due to the size and complexity of the project, it was rational to divide the project into five sections,” says civil engineer and planner Andrea Liereng, who is responsible for the overall progress plans for the planning and engineering of the joint project. She actually belongs to Norconsult, but she is now one of many people engaged in NAA.

“In the beginning each subproject produced their own progress plans using traditional tools like MS Project and Excel,” explains Liereng. “But already in the early stages of the project, when the main progress outlines for each of the sections were ready, we had to start putting the subplans together to get an overview. It is absolutely crucial to see a holistic plan in order to coordinate the progress between the sections. In practice, this did not prove feasible with the traditional tools.”

It was then decided to use Trimble's infrastructure planning tool TILOS for this part of the planning. All subplans were next imported into this tool. The purpose being to get all the subplans coordinated in one overall progress plan that Bane NOR and NAA could use as a management tool.

All-in-one tool
TILOS, which stands for Time Location System, is especially designed for linear construction projects such as roads and rails. The unique tool makes it possible to merge Gantt schedules, construction site plans, profiles, heights, earth mass handling, scales, histograms, etc. – and combine them all in one time-location-based super-chart to get a full overview of the project.

The time-location diagram also creates a visual relationship between the plan and what is produced at the construction site. You get everything visually in one screen chart where you see activity dependencies and constraints in the construction process, as well as see if there are overlaps or conflicts between the activities.

Optimal mass handling
“The first goal was to coordinate the sections in such a way that the overall mass handling became fairly optimal. We worked with this through the winter of 2017 to get a good mass balance between the sections,” continues Andrea Liereng.

“There is, for example, a 23 km long tunnel at the south end of the project and very large fillings in the northern part. As it was planned initially, the mass handling did not balance at all. The stone coming from the tunnel work would have been available long after it was needed for the fillings. If done that way one had to buy stone and then get a big surplus in the end.”

“In TILOS we therefore added stone as a resource that follows the activities. This way we see directly how much stone is available from the tunnel at all times, and how much stone we need for the different work in the day zones. You get graphs that show the mass balance over time and see easily if it goes up or down.”

Cost control
“Also, even the overall cost elements are part of the progress plan,” she points out. “In many ways, getting the costs into the tool was an aha-experience. Being able to see what the project will cost per month or year is invaluable, not least for the contractors and the authorities granting the funding.”

“In that respect, we have an excellent support tool for making important choices and decisions. I can very easily check and adjust things, and immediately see what cost consequences that might cause. You directly get answers to inputs and changes you make.”

Large savings potential
“The joint project is a very big project, so if you can optimize things as much as possible, it can mean a lot of money saved. This is very important, not least also reputation- and environmental-wise. Reuse of soil masses is very central to the project,” emphasizes Liereng.

“Getting a most optimal plan is of course the goal, but to achieve this is not as easy as you might think,” she continues. “Regardless of TILOS, you know how much stone you get from the tunnels and how much stone is needed for the fillings. It is the ´puzzle´ to obtain the mass balance which is challenging. This is very difficult without a tool that combines the relationships. This connection is very valuable.”

Alternative contracts
“We have also used the tool a lot to assist in the splitting of contracts. After we got control of the mass handling, the next challenge was to split the project into logical contracts and decide when ´things´ are to start up. You cannot start everything up at once in such a big project. We have therefore used the tool to create many different alternatives of different ways to split the project, in order to get the best freedom of progress. At the same time, we have tried to make logical distinctions between the contracts.”

Decision support
“We have hence used TILOS actively as a creative decision tool,” says Andrea Liereng. “In client and project meetings we have been able to easily discuss 'what if we do this or that', after which we have used the tool to create the alternatives and see the consequences immediately. We discussed a lot of options for a while.”

“For example, there has been a discussion about rail track types and whether the construction of the tracks should be done from both ends or to start from one side only. By putting this into the joint plan we were able to switch the alternatives on and off and compare them in the meetings. Such a dynamic collection of alternatives has been very positively received. The basis for decision becomes much better.”

Great strength
“In other words, being able to see different alternatives relative to each other is one of the absolute great strengths of the tool. There are always several ways to do things, and no definitive answer. Here you can compare and easily see the differences, and then make the best decision.”

“You also avoid doing things twice with TILOS. In the beginning Excel was used to some extent, but there you have to modify numbers manually in the spreadsheet, if something is changed. Hence, daily there was a lot of double work. So, by just getting rid of doing things twice, means a lot of time saved.”

Competition basis
“The entire joint project, both road, rail, tunnels and bridges, is now put into TILOS,” sums up Andrea Liereng. “The detailed plan is also complete and we are currently working on the tender competition basis for the contractors.”

“The most important thing with this work is to propose the milestones for the contractors. As a basis for the contracts the progress plan must be as realistic as possible. We have every reason to claim that now,” she concludes.